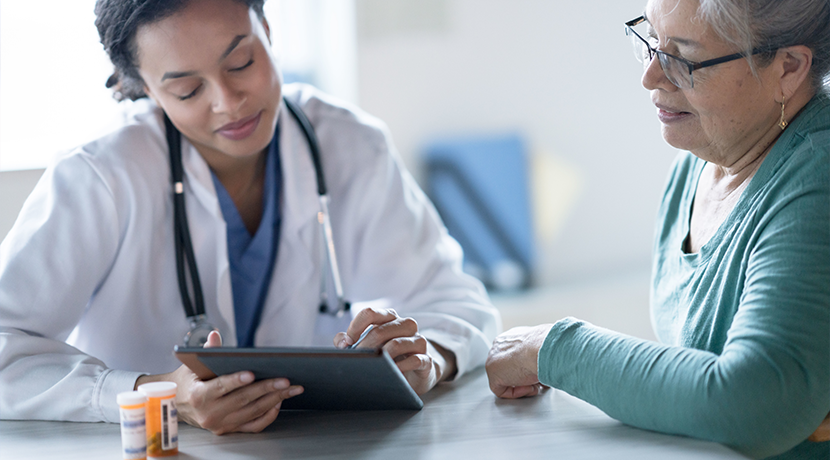 Megan first learned about BRCA genes and their association with breast and ovarian cancer risk about 25 years ago when she read a book about a woman who had a strong family history of those cancers. She identified with the woman in the book and wanted to get tested, but at that time, genetic testing was expensive – about $5,000 – and wasn’t covered by health insurance.

Fast forward several years to when Megan’s aunt was diagnosed with breast cancer. She underwent testing for the BRCA genes and doctors recommended she have other female family members come in as well. Megan immediately jumped at the chance to undergo genetic testing.

“It’s fascinated me from the start because of the potential to learn about your risk for cancer,” Megan says.

Megan had always been a NorthShore University HealthSystem patient so it made sense to continue at the Neaman Center for Personalized Medicine. She met with a genetic counselor who reviewed Megan’s family health history.

“When I saw it laid out in front of me, I realized pretty much everyone on both sides of my family had cancer,” she says. “Then I realized if I have this mutation, my chances of cancer will go up so much. That was really frightening.”

Megan moved forward with the blood test to find out if she had the BRCA gene mutation. After 10 long days, her results were in.

“I remember getting dressed up for work that day, absolutely sure that I don’t have it,” Megan says. “I reserved a tiny conference room at work to take the call. When they told me I have a BRCA1 mutation, I had to leave work immediately because it threw me for a complete loop. I was finding out that although I didn’t have cancer right then, I was probably going to get it.”

At this point, Megan faced deciding between two options. One was a wait-and-see approach, which involved screening for cancer every six months.

“I only went through this one time, and it was so emotionally taxing on me to go to the cancer clinic and see people with cancer,” Megan says. “I couldn’t stop thinking how this could be me one day.”

That left her other option:

“I felt I was given this knowledge for a reason so I made an appointment with an oncologist and breast surgeon,” Megan says. “I felt like something was broke and it was up to me to fix it. I was always very informed of all my options and, for me, the best option was action, right away.”

Megan says her family and friends were all supportive of her decision. But some of them were confused about the choice she made.

“They saw it as a voluntary thing but I viewed it as a necessary thing,” Megan says. “A lot of them have the old school mentality that if something isn’t wrong right now, why would you go to the doctor? But I didn’t want to sit back and wait for something to happen to me.”

Megan found unwavering support in her decision from her NorthShore care team. She recalls being in the hospital on New Year’s Eve and having her nurse come in with her nightly pain pill and ginger ale for a midnight toast.

“They make you feel comforted and like you’re going to get through it,” Megan says. “They are the most unbelievable team of people and I know I can go to them with anything and they will help me. They always made me feel comfortable and confident in my decisions.”

Megan is at the point where she only needs to see her breast surgeon every five years. She has no regrets about her decision and feels it took a weight off her shoulders.

“I realized I can be my own advocate,” she says. “The weight I felt upon learning I had the BRCA1 mutation is gone and I wouldn’t have that peace of mind had I not been tested or done the surgeries.”

Megan recognizes what was right for her may not be right for others. But she encourages others in a similar situation to explore their options.

“It’s fine if you don’t want to get tested but know that it can give you knowledge you might not otherwise have,” she says. “Getting tested was the best decision I ever made but the only person who knows what’s right for you, is you.

“Regardless if you get tested, it’s important to know and be aware of your body’s “normal.” This way, if something is wrong, you can communicate with your doctor right away.”

If you have a family history of breast, ovarian, pancreatic or metastatic prostate cancer (reasons for BRCA1/2 testing) or are interested in learning more about personalized medicine, talk to a NorthShore primary care provider or reach out to the Neaman Center for Personalized Medicine at 847-570-4363.

When Should Teens See a Gynecologist?

Letting Go of the Supermom Myth

What You Actually Need to Eat to Lose Weight